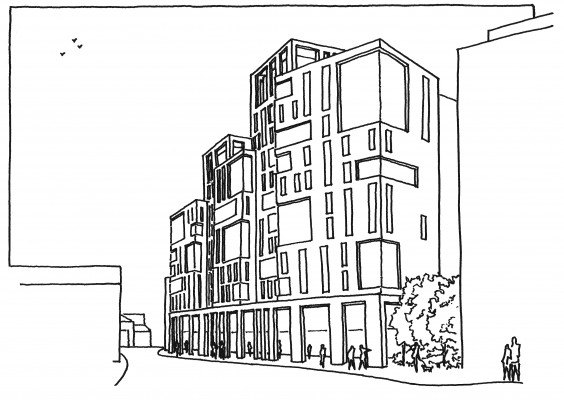 Initial press coverage of the launch of the dedicated consultation website below :-

Right: How the propsed student housing may look, and left, the former Mecca Bingo Hall.

The old Mecca Bingo site in Norwich city centre could be turned into accommodation for 230 students.

The former Mecca Bingo site, with hoarding panels depicting the building’s history around where the building has been demolished in All Saints Green. Picture: DENISE BRADLEY

London-based Alumno Developments has revealed their proposals for a new 230-bed development called ‘The Quad’ on the site of the old bingo hall on All Saints Green in Norwich. If planning permission is granted, the development would be the company’s second in Norwich, following the completion of their project next to Norwich bus station which opened its doors to Norwich University of the Arts students in September.

Mecca Bingo shut in April 2011 and the building was demolished in June 2014. It is now wasteland.

David Campbell, managing director at Alumno, said of the proposal: “We are really pleased to be bringing forward another significant investment in the city centre. This development will provide state of the art accommodation for students coming to study in Norwich, and offer an alternative to existing homes.

“Students are an integral part of Norwich’s economy and diverse community. This development will contribute to that rich vibrancy whilst creating more jobs and supporting local businesses.

Propsed skecth of the entrance to the new student housing on the former Mecca Bingo site in Norwich.

“We look forward to hearing people’s views about our plans, and would encourage as many people as possible to get in touch to tell us what they think.”

The 13-storey development will include a management team on-site and students will not be allowed to park cars at the site or in the local area.

Click on the links below for two further articles :-