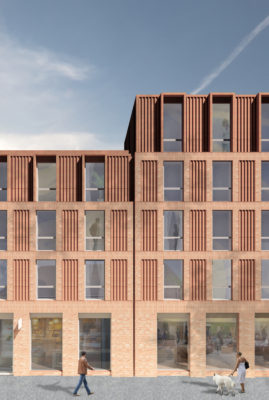 Demolition work and site preparation is well underway on the #BuiltByGMI £24m student accommodation scheme on Dogpool Lane in Birmingham.

Situated within the Stirchley District, will house the growing number of students attending local universities and the city’s dental hospital.

GMI, who have worked with Alumno on a number of student accommodation schemes, including the recently completed Church Inn development in Manchester, will be looking to have the new building completed in time for the 2024 student intake.

Comprising of a mix of cluster beds and single occupancy studio rooms for 167 residents, the development will incorporate brickwork and terracotta detailing, which references local materials.

“I’m really looking forward to getting started on the scheme,” said Project Manager Jack Carey, who was speaking at the site of the currently underused former BT Brownfield site.

“Demolition is currently ongoing and GMI are expected to land onsite at the end of December, with a targeted completion of April 2024.

“At the moment everything is on schedule and I’m really looking forward to seeing how the build takes shape over the course of time.”

Designed by Glenn Howells Architects, there will be a number of stand-out features which will add to the finished build.

“There will be a curved design at the front of the building, which will make it a real landmark development in the area,” added Jack.

“Given where the site is on the corner of Pershore Road and Dogpool Lane, it will be challenge to construct the build, but I love a challenge and here at GMI we are geared up for projects like this, with the design expertise to implement the curved frontage.

“The development is being built in a really historic area, which has probably been neglected over the years, so this building will be a big boost to the local area.

“It’s not far from Birmingham University and the dental university just down the road, so this will really help the growing student population.”