The last of our posts on Alumno poetry commissions takes us back to Norwich. The third Alumno scheme there Benedicts Gate has provided another opportunity to celebrate poetry. A competition was launched in collaboration with the National Centre for Writing in 2019. The winner was Jenny Pagdin. 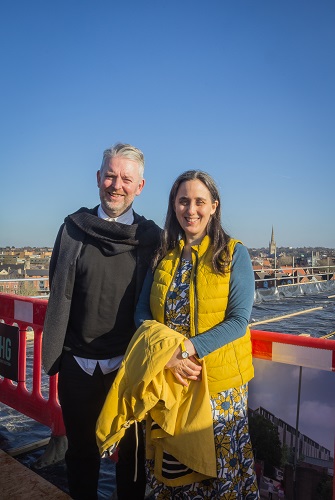 Norwich has attracted writers for centuries. So it seems only right that there should be a poem about the long heritage of the UK’s only Unesco City of Literature. And surely it should be written by a local poet, steeped in the city’s history.

These were the thoughts of arts commissioner Matthew Jarratt when considering a legacy that Norwich’s new Benedict’s Gate student residence could provide for the city and its people. “The idea was that the poem would be etched into the striking exterior of the building as a permanent tribute to Norwich’s 12 historic gates,” he explains.

Working with Alumno, and the Norwich-based National Centre for Writing, Matthew launched a commission, inviting emerging local poets to apply. “We strive to ensure a lasting legacy for the communities adjacent to all our buildings and were keen to offer this opportunity to a poet based in East Anglia who was in the early stage of their writing career,” says Alumno Managing Director David Campbell about the company’s latest arts project and its third in Norwich.

“Poetry commissions are like gold dust, so when I spotted this one I couldn’t believe it,” recalls poet Jenny Pagdin. The Norfolk resident and Oxford University graduate in English was even more surprised when her application was successful. “Winning any kind of commission would have been an impossible dream when I was suffering with post-natal psychosis back in 2013, let alone one celebrating the heritage of a city so close to my heart,” she says.

However, this tough period proved to be the inspiration for Pagdin’s work Caldbeck, which was published in Eyewear in 2017, shortlisted for the Mslexia pamphlet competition, and listed by the Poetry Book Society. What’s more, she was already on the National Centre for Writing’s radar, having been nominated for the organisation’s “A Room of One’s Own” residency.

“We were very impressed with Caldbeck,” says the National Centre for Writing’s Programme Director Peggy Hughes. “Plus, Jenny had also won the Café Writers Norfolk prize in 2018 and was nominated for the Rebecca Swift Foundation Women’s Poetry Prize 2018. She was the outstanding applicant and was clearly both inspired and excited by the opportunity.”

Having won the commission, the enormity of the task struck Pagdin. There were strict criteria to meet, making the project particularly tough. The poem had to feature the names of all the 12 historic gates of the Norwich Old Town Wall. Each one had to be mentioned in a different section of the poem, which would be etched into 12 separate pillars on the building. The individual gates needed to be placed into context through a narrative drawing on the city’s long history.

“I thought long and hard about the best way to write the poem in the most meaningful and engaging way, maintaining a flow that painted a picture of Norwich’s long history, while fitting each gate seamlessly into the narrative,” Pagdin explains. “I decided to take readers on a journey in time from the past to the present, creating a snap shot of life around the different gates during each period and focusing on the contrasting experiences of women across the ages.”

Part of Pagdin’s thorough research involved a tour of Norwich’s historic wall accompanied by an expert guide. “It was a clear, bright, freezing winter’s day,” she recalls. “But I soon forgot the bitter cold as I immersed myself in the wall’s fascinating history. We walked and talked for hours. It was truly inspiring. I couldn’t wait to get home and bring my work to life with my experiences!”

Entitled Sisters of the Gated City, the poem opens at King’s Street Gate in the 13th century, where anchoresses could opt to be bricked into cells attached to a church for years. It moves on to the 16th century when Dutch and Flemish travellers migrated to Norwich, with the poet choosing Brazen Gate as their entrance point into the city.

Pagdin’s poetic time machine also visits local heroine Mary Chapman who founded Bethel Hospital by St Giles’ Gate in the 18th century and depicts 20th century suffrage at St Benedict’s Gate. She concludes the odyssey in the present day as children play by the river near St Martin’s Gate, the final of 12 brief stops along the history of Norwich, each charted by a different entrance to the wall.

“Jenny’s beautifully crafted work is exactly what we were looking for and is perfectly written for the 12 pillars that will display the poem on Benedict’s Gate,” says Jarratt. “We fully appreciate the difficulty of writing poetry to order in this way, but Jenny rose to the challenge like she was born to the task!”

For Pagdin, she’s revelled in the opportunity, creating what she believes is one of her best pieces of work.